By Jeff Tucker via Zillow

Monthly home value growth slowed further in October, on the heels of monthly slowdowns in September and August, continuing to bring the astronomical pace of growth down from its record highs earlier in the summer.

The Zillow Home Value Index (ZHVI) rose 1.3% from September, to now $312,728, up 19.2% from October 2020 level. The annual growth represents an all-time high in data dating back more than 20 years, and the monthly pace is higher than at any point recorded prior to the pandemic — but is still down notably from the a recent high of 2% set in July. The average October monthly appreciation in the U.S. from 2015 through 2019 was 0.4%. In other words, even as the market cools, it is cooling off from an exceptionally hot starting temperature.

Home values didn’t drop in any of the 50 largest U.S. metros, but monthly home value growth decelerated in 42 of them. The slowest monthly growth was seen in Milwaukee (0.1%), San Francisco (0.3%), Buffalo (0.3%) and St. Louis (0.4%), while the fastest was in Raleigh (2.7%), Nashville (2.4%) and Atlanta (2.3%). Still, even as the overall slowdown in the market continued, October also provided early indications that the slowdown in home value growth is itself slowing down: the decline in monthly ZHVI growth was slightly smaller than the decline recorded in September from August.

Perhaps more importantly for buyers this fall, the level of active inventory shrank from September after consistently growing month-month since May — down 17.4% from last year and by 1.1% from September (looking at raw data, unadjusted for seasonality, inventory has fallen month-month in each of the past two months).  All else equal, a lower level of inventory both leaves buyers with fewer options and means less competition for any given seller. The very low level to which inventory declined throughout the first 12 months of the pandemic was closely linked to the rapid home value appreciation experienced so far, and a key question has been whether, or when, inventory will recover to historic levels. October’s inventory shrinkage suggests that it won’t be rising to pre-pandemic levels any time soon.

But while the inventory decline, on its own, may not represent the best news for buyers, it’s also indicative of a return to somewhat normal market seasonality that the market did not experience last year. Inventory generally falls somewhat in the fall from the literally and figuratively hotter spring and summer months. And this “normal” inventory decline coincides with:

All in, the signs point to a for-sale market that seems to be adjusting to a new normal after more than a year of norm-busting behavior, albeit at a still historically strong level. Home buyers shopping this fall shouldn’t count on the same frenzied demand that triggered widespread bidding wars on listings this spring and summer. The normal seasonal slowdown of autumn has returned, when many families are busy with back-to-school activities and planning for the holidays. Buyers can expect less competition, meaning more time to decide on a house and the potential for sellers more willing to negotiate.

The Zillow Observed Rent Index rose a record 14.3% year-over-year in October, to $1,873/month, an astonishing comeback just one year after annual rent growth stalled at 0% in October 2020. But similar to home value growth, the monthly and annual pictures are different. Rents rose 0.8% in October from September, a notable slowdown from 1.4% monthly appreciation in September.

The strong growth in rent in 2021 provides some evidence for overall growth in demand for housing: More people are trying to get a place of their own to live, whether they are renting or purchasing, thanks to a booming population of 25-34 year-olds, as well as rising incomes. The rental vacancy rate fell to 5.8% in the third quarter this year, the lowest 3rd quarter level since 1983, and dramatically lower than the 9.8% vacancy rate from ten years ago, as we exited the 2008-2009 recession.

Home sales activity — which has exceeded expectations in recent months — is expected to get stronger in the near- and longer-terms, while home value growth is likely to slow somewhat through the end of the year but to remain very strong compared to historic norms.

Home values are expected to grow 3.8% in the three month period from October to January 2022, and to end 2021 up 19.5% from the end of 2020. The near-term, three-month forecast is slightly lower than the 4.4% growth expected previously from September to December, largely driven by recent slowdowns (however modest) in home value growth observed throughout the summer and early fall. Over the longer-term, however, our expectations for home value growth have held firm: We expect home values to grow 13.6% over the twelve months ending October 2022, identical to our previous forecast (September 2021-September 2022). The strong long-term outlook is driven by our expectations for tight market conditions to persist, with demand for housing exceeding the supply of available homes.

We currently expect 6.12 million existing home sales to close in 2021, up 8.5% from an already strong 2020 and also up from our previous forecast of 6.04 million sales this year. Existing home sales volume rose to 6.29 million (SAAR) in September — up 7% from August, the fastest one-month growth in the annualized series since last fall. This stronger-than-expected showing is the main contributor to the upward revision in our near-term outlook for the series. Our longer-term forecast for sales was also revised up, in part due to changes in home affordability. Though sharply rising home prices present affordability challenges for many, low mortgage rates continue to keep monthly payments manageable for those who can afford a down payment.

However, downside risks to our forecast remain. The expiration of mortgage forbearance programs adds uncertainty to the outlook for for-sale inventory, and elevated inflation heightens the risk of near-term monetary policy tightening, which would result in higher mortgage rates and weigh on housing demand. 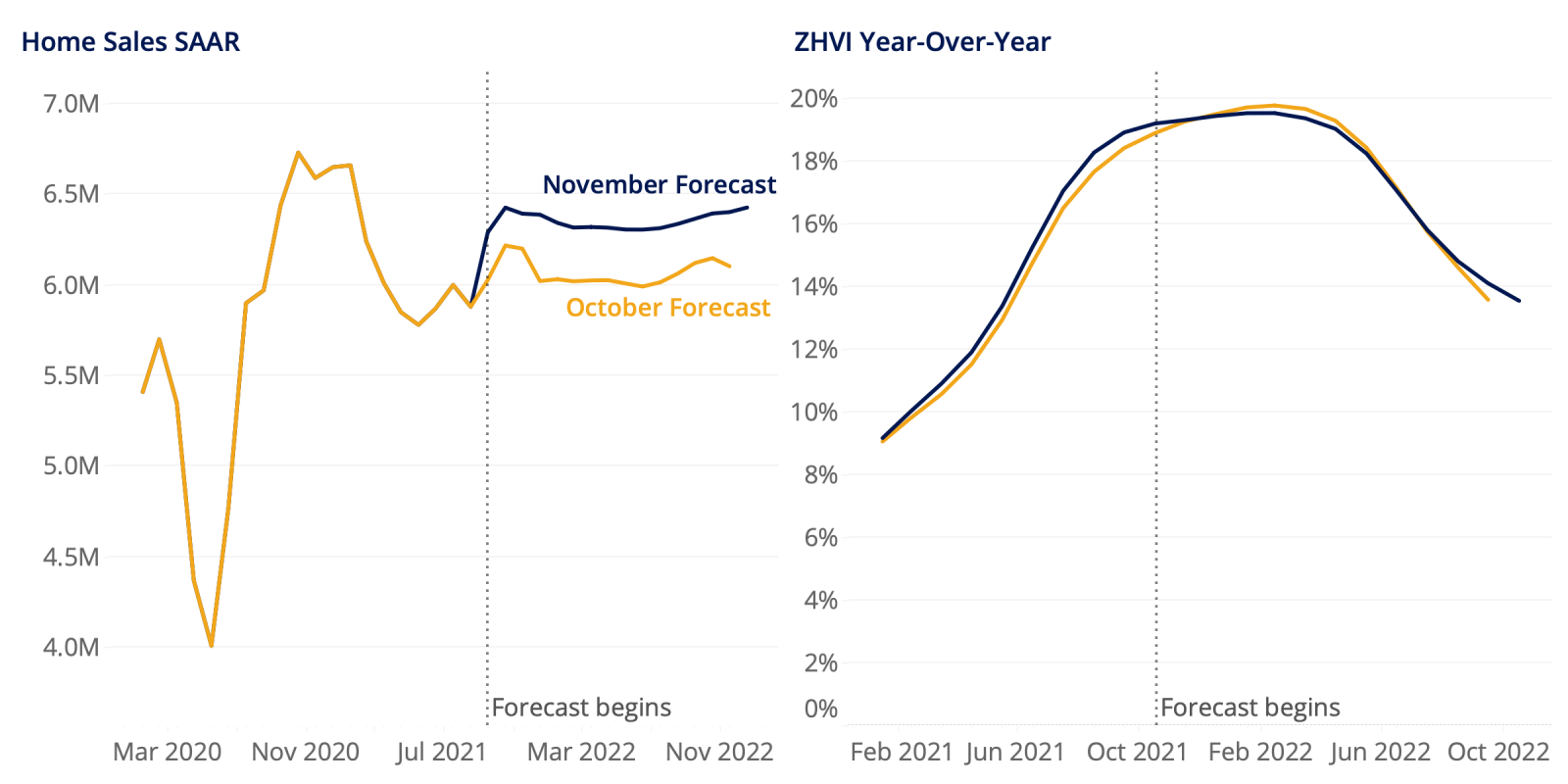